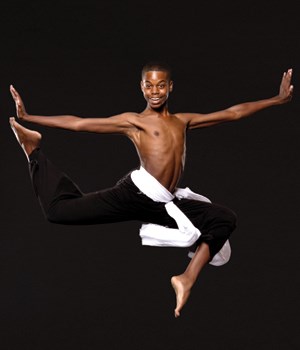 Texas Baptist Children’s Home has been home to thousands of boys with incredible gifts and talents for more than 60 years, but perhaps never one like 15-year-old Terrance Carson.

Terrance is one of seven boys that call Cottage 8 home and during the day he does just as they do: he attends his classes, completes his chores, and occasionally joins in on a pick-up game of after-school basketball.

But in the evenings, Terrance leaps, kicks and turns his way across glossed wooden floors with nearly as much ease and poise as a seasoned danseur.

Terrance is a dancer, one with more talent than is usual for his young age, and it’s beginning to turn heads.

“He has something that could lead to a scholarship and professional dance in his future,” said China Smith, his dance coach and mentor. “It was very apparent to me, almost like his body was made to do this.”

Terrance is a dance major at The Fine Arts Academy at McCallum High School and a member of Smith’s dance company, Ballet Afrique, in East Austin. Although talented, he goes about his life in humility and quiet confidence.

For this teenager, dance is more than a hobby; it’s his preferred way of communicating.

“I take dance as an expression or as a way to tell a story,” he said. “I like to blend contemporary and African styles together. It’s really fun to connect to my history and share it with other people. It has made me grow a lot.”

At the age of 9, Terrance got his first taste of the arts while performing for a summer camp musical. That’s where he met Smith and their paths crossed again a few years later when he moved to the Texas Empowerment Academy. Smith worked as a dance instructor and Terrance, seventh grader, decided to take Smith’s dance class.

“When we’re just talking about boys in dance in general, ballet requires a certain amount of discipline and focus that even adults have a hard time with,” said Smith. “But this is something he loves to do.”

“It feels like that here, with everyone else having things going on too, they do a really good job of helping you do what you want to do,” Terrance said. “Itwould have been a lot harder to go to school and be in the dance company [at a different location].”

After Smith, who is protective of her protégé, met his house parents, David and Kae Lyn Geyman, any misgivings she might have had about him moving into the Children’s Home disappeared.

“We talk about what a blessing it is to have so many families around you to support you with love,” Smith said. “I think that’s going to be what makes the difference in a successful story for him. He has all these people that are going to love and care for him.”

His house parents and cottage brothers saw him dance on stage for the first time in December. The entire cottage watched his performance in awe of his capabilities, applauding his every move, and bragging about his accomplishments all the way home.

"I really enjoyed them coming out," he said. "It's nice when you go out to do something you like, having people appreciate it and supporting you."