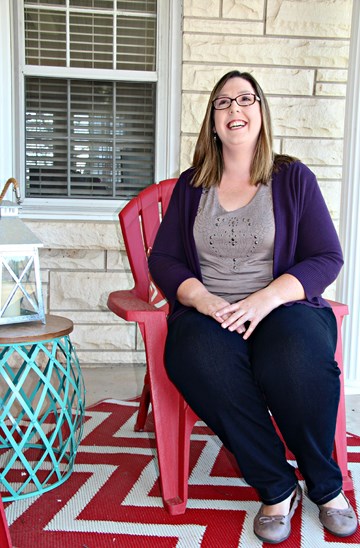 As a child, Megan’s life was far from perfect. But the Lord used the Campus Life program at Texas Baptist Children’s Home to make something beautiful of her life.

Megan’s parents divorced when she was young and they shared custody of her and her sister. However, after Megan endured abuse by family members, her mom gained sole custody of both girls. “We were taught to be a picture-perfect family when people were watching,” Megan says. “But the truth was that we were far from perfect.”

From a young age, it was instilled in Megan to be “tough.” In their home, any display of emotion was seen as weak and Megan was trained to stuff her feelings deep inside. Although they had legally addressed the abuse Megan suffered, they never discussed it as a family. “It was never spoken of, which is very counter-intuitive to who I am,” explains Megan. “I needed to talk through things like this, but it wasn’t allowed in our family.” As Megan grew older, she and her mother began to clash and their relationship became very strained and difficult.

When she was only 15 years old, Megan’s mom brought her to the Campus Life program at TBCH. Megan’s stay had initially been planned to be a temporary solution while they worked through personal issues, but Megan’s mom disengaged and eventually disappeared from her life … making her residency at TBCH permanent.

This turn of events left Megan feeling broken and angry. But she continued to suppress these feelings like she’d been taught as a child. On the outside, everything was okay. But on the inside, Megan was boiling with anger toward her mom. “I felt like my mom chose my sister instead of me. It felt like she chose one of us over the other. I was wounded and shattered by the decisions she made.”

At TBCH, Megan began to settle into her new life. It was very different than what she’d known before. Her house parents, Kelly and Brenda, were exactly what she needed. They allowed her to slowly acclimate to her new home. “Surprisingly, I connected with them. They were patient with me and they earned my trust, even though I was slow to give it.”

“They gave love to me from day one, but I didn’t always receive it. I was angry and it took a long time for me to realize they wanted to be there – loving me, supporting me, and encouraging me, no matter what.”

Having a positive male role model and father figure in her life was a new experience for Megan. Until she came to TBCH, she had only known men who caused hurt and pain. But Kelly was a different kind of man. He was loving and kind. In the process of earning her love and trust, Kelly was able to help Megan understand what a healthy relationship with a father looked like.

Megan developed a deep connection with her house mom as well. “Brenda was one of the first women in my life to make time for me, even if it was 10 o’clock at night after I got home from work,” she says. “For people who come from backgrounds of trauma or trust issues, it’s hard to build relationships. That time was what I wanted and needed most. It allowed for our relationship to grow.”

For the first time in her life, Megan had a family. At TBCH, the Lord provided Megan with parents who loved her and a healthy environment in which she could begin to heal from the hurt of her past. As a young child, Megan had always been told that she wouldn’t amount to much. But to Kelly and Brenda, she was somebody special.

With the support of TBCH’s Campus Life program and her house parents, Megan went on to graduate from high school and have a successful career. She recently decided to pursue her dream of becoming a labor and delivery nurse and was accepted to the nursing school program at the University of Mary-Hardin Baylor.

“Emotionally and spiritually, TBCH saved my life,” Megan proclaims. “I’m so thankful for TBCH being a place where I could experience something that was lacking in my life: a safe place, unconditional love and a faith-founded family. Those are things that I never had as a child and so I’m grateful.”