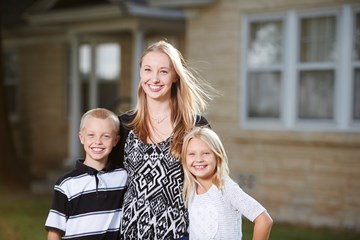 Born and raised in Round Rock, Brittany grew up attending school with kids from Texas Baptist Children’s Home and was familiar with the organization. Brittany felt like TBCH had always been a part of her life, but she didn’t realize that it would become more like family as she grew older.

Brittany got married in 2003 after graduating high school. She had two children, Jacob and Kimberly, and a husband who provided for their family. She always felt like her role as a stay-at-home mom was God’s plan for her life. After several years with her husband, Brittany’s marriage turned toxic and was plagued by physical abuse, which prompted their divorce. The heartache she experienced from her ex-husband left her with a lot of pain and hurt, which resulted in her distancing herself from her friends and family.

“It was really hard emotionally for me with going through a divorce and trying to support my two children,” Brittany remembers. “I didn’t know what I wanted to do with my life.”

Her family was supportive in helping her get back on her feet, but Brittany didn’t feel like she was really learning how to manage on her own if she kept receiving help from her family. Thankfully, her aunt introduced her to the Family Care program at TBCH. Brittany enrolled and spent after a year and a half in Family Care. However, she decided to leave before completing the program – against the recommendation of her counselor and Family Life Coordinator. After she left, Brittany realized that she couldn’t just get by, but she needed to concentrate on building a solid foundation for her family.

“When I left TBCH, I kept choosing the same path of meaningless jobs and that wasn’t getting me where I wanted to be. I had a dream of owning a home and having a career, and everything I was doing wasn’t getting me back on the right path.”

After many failed attempts of trying to get back on her feet by herself, Brittany knew she needed to return to the Family Care program. But this time she approached it differently, engaging with the other moms and living in community to find the support she needed.

“The staff here doesn’t want you to just get in and out of the program. They really invest their time and emotions in helping you. I am thankful they are amazing at TBCH and didn’t give up on me after I left the first time.”

The second time around, Brittany understood the value of the many benefits the program offered, such as the faith-based counseling sessions. “I felt so alone after my divorce, but I’ve learned that I can be a single mom, a provider, and supporter for my children.” Slowly, she began to find her own identity in light of God’s plan for her life, not in the events of her past. Because of the difference that Jesus has made in Brittany’s life, she is able to guide her children in their faith. Her hope for Jacob and Kimberly is that they would love God and learn about him through His Word.

Brittany also learned the importance of building and maintaining friendships with the other mothers in the program. In the past, she was always quiet and kept to herself, but now she treasures the deep relationships she has built with other moms. She realizes that they’ve played a big part in her own growth and maturity.

These days, Brittany is seeing her dreams become reality. She has a full-time job and is working toward an established career path. Jacob and Kimberly are growing up in a healthy home environment with a mother who loves them and cares for them. Together, her family will soon move into a Habitat for Humanity home that was awarded to them. Because of the Family Care program at TBCH, Brittany has great hope for the future and her children will have every chance for success in life.