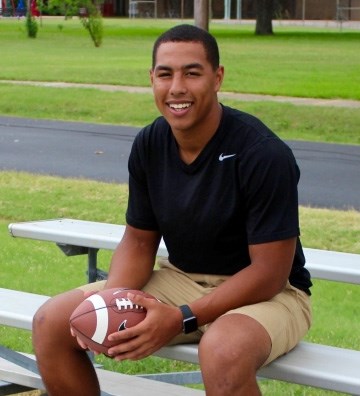 Malik was on the cusp of a major milestone that every teenager looks forward to. He was about to enter high school! But just before his freshman year, he was faced with a challenge that would change his life.

Malik grew up in a single-parent household. With his mother working a lot, he learned how to take care of himself at a young age and would later help care for his brother, who is 11 years younger. However, Malik and his mother had a very unstable relationship. What he really needed was a healthy home environment where he could learn and grow with a family and other kids his age.

When his mom was offered a job in a nearby small town, she chose to place Malik in the Campus Life program at TBCH. They both knew that TBCH would provide the stable environment that he needed, and it would allow him to stay plugged in to his community. By living at TBCH, he was able to continue attending area schools and be part of the excellent athletic programs they offered.

Malik always had an interest in education and sports. He enjoys life in the classroom as much as he enjoys life on the field. A natural-born athlete, Malik loves playing baseball and basketball, but it has been the game of football that has helped him develop as an athlete and a young man.

The transition wasn’t easy. As his mom and brother relocated, Malik moved into a cottage on the TBCH campus with his house parents, David and Kae Lyn Geyman, and seven other boys. Despite being surrounded by a house full of people, the loneliness began to set in.

“It was difficult not being with my little brother anymore and I felt like my mom was letting me go. I felt alone,” Malik remembers.

Malik’s house parents helped with the transition by modeling what a healthy household looks like, which was something he hadn’t seen before.

“David is one who has taught me patience. I see it in the way he handles the boys in the house and he is understanding of everyone’s past situations. Kae Lyn loves my mom and helps me bond with her by encouraging us to spend time together and communicate.”

Malik continued to grow as he adapted to his environment in his new home, but it was also on the football field where he was learning discipline and leadership.

After Malik was injured while playing football during his freshman year, doctors told him it is was unlikely that he would be able to play the rest of the season. Malik was saddened by the news because he had been playing since he was 5 years old and had developed a passion for the game. But through discipline in his recovery, he returned to the gridiron his sophomore year in 2015 and had an explosive season with 29 touchdowns as a running back.

Being on the football team has helped Malik learn to be a leader in his cottage at TBCH. Even though he is one of the younger boys in the house, Malik leads by example when it comes to household responsibilities.

“He is dependable and responsible. He has good character and that is something we honor in the house with more responsibility and freedom. The other boys in the house see that and know what type of actions [as house parents] we are looking for,” David says.

Football and daily life in the cottage have helped mature Malik’s character, but the greatest changes have stemmed from his faith, which is deeply rooted in God’s Word.

“My faith has helped me trust and know that God has a plan for me and He will work everything out. I may not always have someone who’s there for me, but I know He will always be.”

Since being at Texas Baptist Children’s Home, Malik has developed a personal relationship with Jesus and was recently baptized at a retreat with his youth group, an event that David and Kae Lyn were able to attend. In his cottage, Malik has the support and structure he’s always needed in order to be successful and achieve his dreams. “We are excited to see what the Lord has in store for Malik,” says David. “We know it will be something incredible and we look forward to watching him grow into an amazing young man!”