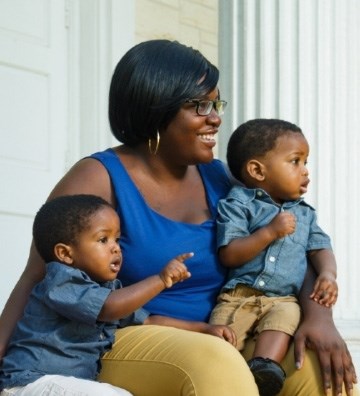 Traneice placed her two-month-old baby by the front door of her apartment, hoping a breeze from the crack in the door would provide a break from the summer heat. She had just been evicted and felt the weight of her loneliness as she packed her things by herself. With the electricity already shut off, Traneice scrambled around the apartment trying to gather her belongings, leaving the remainders on the front lawn for strangers to take for free.

In that moment, she had no idea how much her life would be transformed by a community of women who would soon surround her.

In the summer of 2009, shortly after her first year of college, Traneice’s mom suddenly passed away. Traneice returned home to Round Rock to take a break from school, but the deep sadness she felt from the loss of her mother was overwhelming.

“I tried to pretend like it didn’t happen,” Traneice remembers. “I was just trying not to deal with it.” She was never close with her dad and lacked the guidance and support of a father figure as she grew up. After her mother’s death, Traneice was left with no one to help guide her into adulthood.

In 2013, Traneice reunited with a high school boyfriend and, after two years of an on-again-off-again relationship, they found out they were pregnant. In March of 2015, they welcomed their son, Javian. Unfortunately, Traniece’s relationship with her boyfriend didn’t work out and they went their separate ways soon after Javian was born.

By the age of 25, Traneice had experienced the deaths of both her mother and father and endured the hardships of raising a baby on her own. Without a college degree, she also struggled to find job stability, which directly affected her living conditions and emotional health. After reconciling with her ex-boyfriend in 2016, Traneice unexpectedly found out that she was pregnant once again.

Completely unprepared for the news, she was paralyzed by fear. She hadn’t planned for this and had a difficult time providing for one child. She had no idea how she would manage to be a mom of two. “Though I knew God … I felt like I was just always getting knocked down after I took a few steps forward. I could not understand why all these things were happening to me.”

Thankfully, a friend told her about the Family Care program at Texas Baptist Children’s Home (TBCH). When Traneice came to TBCH, she felt hopeless and ill-equipped to raise her boys as a single mother. She was scared for the future of her family.

However, the community that surrounded her at TBCH was unlike anything Traneice had ever experienced. She was able to live in a cottage with other single mothers who were mentored and encouraged by Mrs. Elizabeth, their Family Life Coordinator. Mrs. Elizabeth reminded Traneice how much God loved her and provided the stability that she had longed for since losing her mother. Mrs. Elizabeth became the voice of Truth in her life, as well as a shoulder to cry on and ear to listen when Traneice needed it.

When Traneice’s second son, Cameron, was born, the other mothers in her Family Care cottage threw a baby shower to celebrate. These precious women shared so much of their lives together and their circumstances forged a deep bond. They understood each other and encouraged each other daily. Having this sweet community helped remind Traneice that she wasn’t alone.

When it came time for her to reenter the workforce after Cameron was born, Traneice had the support of TBCH staff who helped her prepare for interviews. At TBCH’s Boutique, Traneice selected stylish, professional outfits that helped her look and feel beautiful. It gave her that little boost of confidence that she needed – and she landed a steady, full-time job that allowed her to provide for her boys! In addition to her new job, Traneice was able to meet with a professional counselor at TBCH who helped her begin to heal from her past so that she could experience hopefulness and restoration.

When she graduated from the Family Care program in 2017, Traneice felt empowered and equipped to embrace her family’s future. She was financially stable for the first time in her life, which allowed her to move into her own place with her two boys! “I understand now that God does not take me through the things He does [in order to] to punish me, but He does it to help grow my faith. Now if I find myself in a bad spot, I don’t get depressed like I used to. I am able to handle things differently now because I know God has my family in the palm of His hand.”