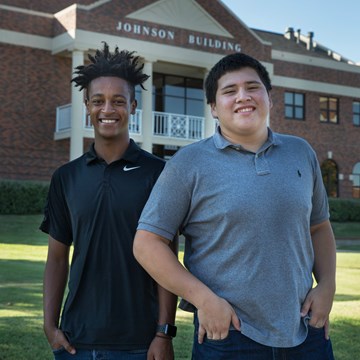 As young boys from hard places, the odds were once stacked against Israel and Kenneth. But thanks to the partnership of Texas Baptists, the boys are getting the chance to achieve their dreams at Hardin-Simmons University.

Move-in day at Hardin-Simmons University was a day of excitement and celebration for Kenneth and Israel. The weeks prior had been a frenzy of packing their belongings, getting all the essentials for their dorm rooms, and saying their goodbyes. But finally! The day that they had dreamed about for months was here! After unloading and helping the boys set up their new home, their house parents proudly hugged them goodbye and waved as they drove away. As they looked around their shared dorm suite, Kenneth and Israel realized that all they’d worked for was finally coming to fruition. They were officially college students.

Both Kenneth and Israel came to the Campus Life program at Texas Baptist Children’s Home (TBCH) as young boys who needed the loving embrace of a family. The residential program offered the structure and stability that they needed to grow into strong, caring young men. Growing up at TBCH, Kenneth and Israel were able to experience a normal, happy home life where they lived in a cottage with house parents who modeled a healthy family environment.

“My house parents, the Geymans, were some of the first people to really believe in me. They’ve been some of the most impactful people in my life,” says Israel. “They really stepped into the role of being our parents and I know they’ll do anything for us,” added Kenneth. “They helped us be able to achieve our dreams and go to college. They helped us get to a place where that was possible.”

The boys studied hard to make good grades in school, played extracurricular sports, and dreamed about what they would be when they grew up. They graduated from high school this year and are now enrolled in their first semester of college at Hardin-Simmons University!

Kenneth and Israel are one step closer toward their goals of college degrees and successful careers because of the partnership of Texas Baptists. Both of the boys were awarded the Big Texas Country Scholarship through Hardin-Simmons University and the Roger W. Hall Opportunity Scholarship of the Baptist General Convention of Texas (BGCT), which is available to children who grow up in a children’s home affiliated with Texas Baptists. In addition, Kenneth and Israel have been awarded the Byron Bryant Memorial Scholarship through the Children At Heart Foundation.

Mr. Bryant served as the Director of Development and Public Relations at Children At Heart, as well as an administrator at Hardin-Simmons University. “We are thrilled that the boys are utilizing the scholarship fund to receive an education,” says Ann Lindsey, daughter of Mr. Bryant. “It is our great joy if we can have even the smallest part in seeing these guys succeed and become productive adults!”

“The professors at Hardin-Simmons really seem to care about us and want us to succeed,” shares Kenneth. “They are really involved with their students and it makes me excited to go to school here. The next few years could be really great!”

These scholarships not only allow Kenneth and Israel to earn their degrees without having to incur debt from student loans, but they also empower the boys to alter the course of their lives forever. Israel was the first member of his family to graduate from high school and now he’s blazing a path for himself to become the first college graduate of his family as well! He loves technology and is planning to major in computer science. Kenneth has a passion for basketball and is the second person in his entire family to go to college. Throughout middle school and high school, his teachers were such an inspiration to him and encouraged him to pursue his dreams. Kenneth plans to study history and physical education so that he can become a teacher and basketball coach in order to give back and make an impact in the lives of other children who come from hard places.

Kenneth and Israel are only two of the many stories that have been forever impacted by the generosity of Texas Baptists, donors, friends, and other ministry partners. These coordinated efforts are helping to meet the immediate needs of children and families across the state of Texas and impacting generations to come!