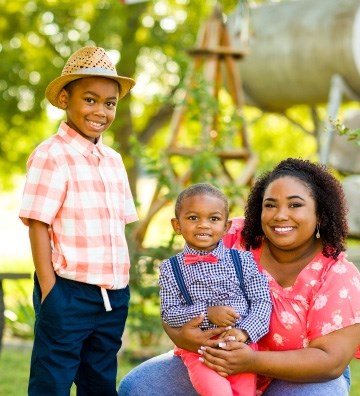 In the background is the sound of two happy boys playing together and occasionally interrupting with a question. Danielle laughs playfully and helps her sons with their toys, while continuing the conversation – just like a well-balanced single mom. To hear how hopeful she is for her future and the future of her family, you’d never know that just a couple of years ago, Danielle was in one the darkest places of her life.

After her relationship with the father of her boys ended, Danielle’s life came to an abrupt halt. “I didn’t know what was next for me or my boys. It was like hitting a dead end – both legally and financially,” she remembers. “I didn’t feel like I could go to my family, but we desperately needed a safe place to stay.” As the stress of her new situation began to grow, she started having breakdowns and panicking about the future. “I lost all confidence in myself and became so fearful of everything. It’s like you could smell the fear on me.”

Thankfully, Danielle and her boys, Dorian (8) and Judiah (2), were able to join the Family Care program at Texas Baptist Children’s Home (TBCH) in the fall of 2018, where they found the safe home and stable family environment they needed. They moved into a cottage on the Round Rock campus, where they had their own private bedroom and bathroom, but shared living spaces with other families that had come from similar situations. Danielle quickly bonded with the other mothers and the boys were thrilled to have new friends to play with. In this supportive community, she was able to let down her guard and take a deep breath for the first time in a long while.

As she settled in and started her journey toward healing, Danielle began to reorient herself from the trauma of her past to the promise of her future. She met with her counselor regularly and, as she regained the confidence that was once lost, she began making plans for the future of her family and getting excited about what it might hold. Along with her Family Life Coordinator (FLC), Jaymie, she set educational and financial goals for herself and began to work toward them. As Danielle healed, her go-getter personality and attitude began to reemerge.

She enrolled in classes at Austin Community College and began taking a full course load, while also maintaining a part-time job. She knew that her dream of becoming a nurse was a lofty goal, but she also was confident that she could achieve great things through hard work and determination. Learning how to juggle her job, school, and single parenting was a challenge, but Danielle knew it would be worth it. She often found herself doing school work during her sons’ naps and various breaks in the day because she wanted to make the most of every moment.

“When we were sheltered in place due to COVID-19, Danielle was amazing,” says Jaymie, her FLC. “She just went with the flow and figured out how to help her 2nd grader with his online schooling as well as entertain her soon-to-be 2-year-old. I’d often hear shrieks of happiness and giggling – the living room became the classroom as well as the playground and she never complained.”

In addition to setting goals, one of the most transformational things during Danielle’s time at TBCH has been learning a new approach to parenting. “The staff has taught me what it looks like to strive to be the best mom for my kids and it’s completely changed the way I parent,” she says.

Through group counseling and training sessions called “Nurture Groups” that are offered to Family Care moms, Danielle has developed new insight into understanding the behavior patterns or her boys and being able to identify the root issues that lead to their actions. As a mom, this helps her understand what Dorian and Judiah are thinking and feeling, even when they don’t have the words to explain it.

“Not only have I grown during our time here, but I’ve seen my sons really thrive,” Danielle says with a smile. “One of them was super shy and quiet when we first arrived and now he’s really engaged and enjoys the sweet friendships he’s made with the other kids in the program. I’m so proud of them!”

While in the Family Care program, she has been able to get back on her feet financially in order to meet both her financial goals and to provide for her family – and she’s even started saving for their future! In June 2020, they transitioned into an Independent Living apartment on TBCH’s campus, where the family has their own space and is learning to live independently again. Dorian and Judiah are loving it and can’t wait for their family to have a house of their own, which Danielle is hoping to be able to purchase for them in the near future. With much of her course work already behind her, Danielle will be applying to nursing schools this fall, which brings her one step closer to her dream of becoming a nurse.

At TBCH, Danielle and her sons found a loving, supportive community during their time of greatest need. “They have been so loving and encouraging and I can’t imagine our life without them,” she claims. “No matter where we go, I always want to be part of this community and for my kids to grow up knowing what an important role it played in our family. Our time here has really renewed my faith. I know we wouldn’t be where we are without God placing us at TBCH.”