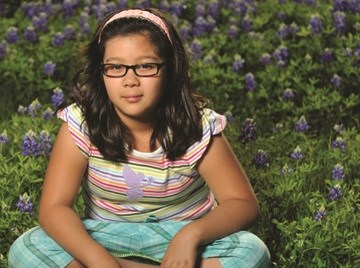 Imagine for a second that you are a preteen girl. Now imagine seeing the world through severely crossed eyes and being a target for bullying and abuse.

That is the world of 12-year-old Hannah*, who lives at Texas Baptist Children’s Home. But thanks to the diligent efforts of TBCH staff and caring doctors, she has the chance to see everything differently.

Life started rough for little Hannah. Born to a military family, she was raised by her mother after her father had been sent overseas. It was while he was deployed that Hannah’s father got word that Child Protective Services had taken Hannah away from her mother because of abuse.

“The father tried parenting her for two years, but it just wasn’t working,” said her caseworker at TBCH. Hannah came to live at TBCH in November 2011.

By then, her emotional wounds were so deep and her defensiveness so apparent, it was obvious she was in need of a great deal of love and patience. Aside from having trouble connecting socially, Hannah was plagued by an obvious eye disorder called estropia, or being “cross-eyed.”

“In some people, it’s not very noticeable, “ her house mother said. “But in her case it’s severe and very apparent. It makes her a huge target for ridicule, which doesn’t help her self confidence at all.”

In most cases, esotropia can be treated early. But, if it remains untreated, the problem only gets worse and the effects more damaging. Neglect on the part of previous caregivers contributed to the severity of Hannah’s problem. After she failed two eye exams after she arrived at TBCH, her house parents tried to help her condition.

When her caseworker took her to enroll in a local elementary school, the school nurse told her about the Gift of Sight program at Lenscrafters. They visited with Dr. Keith Dennis in Round Rock, who was immediately impacted by Hannah’s story.

“It just really touched me,” he said. “She was already pretty withdrawn, and I knew that we had to do more for this little girl than just give her a free pair of glasses.”
Dr. Dennis was already prepared to help Hannah with an examination and corrective glasses, but he couldn’t shake the feeling that more needed to be done, including surgery.

“My 18-month-old son had just been diagnosed with cancer and I had seen a lot of sick children coming in and out of the hospital, so I was even more softened to the plight of kids dealing with debilitating problems,” he said. “Hannah’s case just gnawed
at me.”

Dr. Dennis began researching surgery options for Hannah, feeling that he couldn’t do the surgery that would be necessary, but he could find someone who could.
Meanwhile, Hannah’s caseworker was pursuing Medicaid coverage, which would cover the cost of the surgery. Dell Children’s Hospital agreed to perform the surgery once the coverage came through.

“Hannah has dealt with abuse her whole life, and so she’s always had trouble making friends,” her house mom said. “Having this surgery could change her entire life. It would at least take away one of the stigmas she has had to live with for so long.”
As she continues to undergo counseling and social skills classes, Hannah finally has something she hasn’t had in a long time – hope.

“We’re just so thankful to the people at Lenscrafters in Dr. Dennis’ office,” said TBCH Executive Director Keith Dyer. “They just took the ball and ran with it.”

Right now, Hannah is wearing corrective lenses to strengthen her eye muscles. By summertime, the house parents will assess if the glasses have helped enough or if surgery is the best option. Ultimately, the final decision will be up to Hannah.
“I hope she decides to have the surgery,” Dr. Dennis said. “It could make a huge difference in her life.”

But, as many have seen, having a team rooting for her has already done just that.