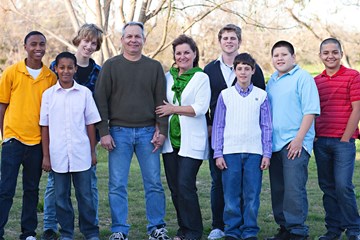 On the surface, 13-year-old Kenneth looks like any other kid his age. He likes hip hop music, wants to be a basketball player or football player when he grows up and isn’t a huge fan of homework.

But, unlike most young teenagers, Kenneth had a pretty rough life. Expelled from school and ejected from home, he’s spent a lot of his years trying to find his footing on a pretty unsteady path.

It took the partnership of two of Children At Heart Ministries' sister agencies to help Kenneth start to realize his true potential, making a smoother way toward a brighter future.

When Kenneth was brought to STARRY’s SAFE (Shelter Alternatives and Family Empowerment) Program, his family had recently been evicted from their home. After staying with friends, the quarters were too cramped, so Kenneth’s mother sought out David Thompson, SAFE Program Case Manager, who also acted as an interpreter between the Spanish-speaking woman and other staffers.

“We saw in Kenneth someone who needed supportive services,” said David. “But otherwise, he seemed to have a healthy home life. There was no abuse that we could see. His greatest obstacles seemed to be that he needed some consistency.”

After six weeks in the Emergency Shelter at SAFE, Kenneth was placed in the Campus Life program at Texas Baptist Children’s Home, giving him an opportunity to live in a home-like cottage with house parents. For house parents Keith and Debra Stone, transitioning a child from STARRY to TBCH was a new and unique request.

“We were pretty new at this, so we weren’t sure what to expect,” said Debra. “But, I tell you, we have just really bonded with Kenneth. I love him like he was my birth child.”

Kenneth had been attending an alternative school before coming to TBCH and initially the transition into a mainstream public school was a bit rough. During a situation where he was being bullied, he confessed that he wanted to fight back, but thought better of it.

“He told us that he wanted to hit the bullies back, but then it occurred to him that if he did, he might have had to move out of TBCH,” Debra remembers. “He said he would do anything to keep that from happening.”

In just a few short months, Kenneth’s grades improved significantly and his teachers are constantly singing his praises. “We get phone calls from teachers telling us what a delight he is,” said Debra.

For Campus Life Supervisor, Jason Schmidt, seeing Kenneth’s transformation from gun-shy pre-teen to lively outgoing young man has been a blessing. “This is one of those situations where you’re just so blessed to be put in the child’s life,” he said.

Beyond house parents and case workers, the one Kenneth has come closest to is Christ. Before coming to TBCH, Kenneth had only brushed up against religion. These days, he says he has a much closer relationship with God, and that has made all the difference.

“I know now that He died for my sins,” Kenneth says about what he’s learned. “If he didn’t do that, then all the stuff I did before would have left me with no hope. Now I have hope.”

Both STARRY and TBCH can be credited toward pointing Kenneth down this new road. And it wasn’t even just a matter of a job well done. “There was a true investment in this child’s future,” said Debra.

Nothing spoke to that fact more than the numerous times David checked in on Kenneth’s progress in the cottage, going so far as to connect with him for a little one-on-one basketball at the on-site recreation center.

“It was awesome for the two of us to get together and just brag on Kenneth together,” said Debra. “It was incredible to see.” Jason says that in times of partnership, there’s always a deep desire to see success. This time was one of those shining moments.

“Kenneth’s story demonstrates what can happen when two sister agencies work together on behalf of a child’s best interest,” he said. “His story shows what God can do through TBCH and STARRY.”

For Kenneth, who has found new “brothers” among his cottage family, he sees it just a bit more simply. “It’s a good place to start a new life or to get a second start,” he said. “Now someone’s watching over me.”