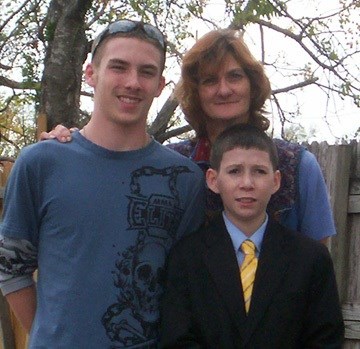 When Jesus raised Lazarus from the dead, he may have been the only one who knew for certain that it was not a lost cause. In a sense, you can say that Joyce is a re-staging of that same miracle.

After facing certain death brought on by addiction that forced her to leave the Family Care Program at Texas Baptist Children's Home, God used a dedicated group of strangers to help turn things around.

“I was addicted to drugs and alcohol back then,” Joyce said of her life two years ago. “That’s why I had to leave the program.”

Working with Joyce to face her addictions, Family Care Intake/Aftercare Coordinator Cristy Ragland and Therapist Nichole Hart had to have a serious talk with their client.

“She was very motivated when she was here,” Cristy remembers. “But her addictions were hindering her in many other ways. She chose to leave the program because she wasn’t at the place in her life where she wanted to face her addictions head on.”

It was the first “intervention” moment for Joyce and wouldn’t be the last. Joyce and her sons moved into an apartment where they began what they thought would be a better chapter. But Joyce’s addictions still had her in their clammy grasps. And now, with money coming in, she added online gambling to her list of vices.

“I was working at the time and that’s when I started gambling,” she admitted. “It got to the point where I didn’t want to do anything but sit in front of my computer, get high, and gamble.”

It didn’t take long for her bad habits to cause her to lose her job. Now, with no way to provide for her children, Joyce had a heartbreaking decision to make. Joyce’s grown daughter offered to let the children live with her, but Joyce was not welcome as long as she was using. For a time, her youngest son, Shawn, was placed in the Texas Baptist Children's Home Campus Life Program.

“Leaving them felt like the end of the world,” Joyce recalled. “I’d been there before when Child Protective Services wanted to take my kids. I didn’t want to go through that again but it was the best thing for them.”

Joyce, now homeless, began living in her car, moving it from place to place, still scoring drugs and alcohol wherever she could. When her car broke down, Joyce pitched a tent in the woods, where she would live for nearly a year.

“My addictions just got worse,” Joyce said. “I wasn’t working. I wasn’t trying. And I was lying about everything.”

Finally, in the spring of 2011, two angels of mercy entered Joyce’s life. Derreck and Shannon Brown, founders of Austin Revival Center Street Ministries, were delivering meals and ministering to the homeless families near Joyce’s tent.

“I felt immediately drawn to her,” Shannon said of the first time she saw Joyce. “She had no hope. It was written all over her.”

If there are two people who understand a feeling of hopelessness, it’s Shannon and Derrek. Both former addicts, they were each homeless separately and then together before finding Christ. After dedicating their lives to His service, they founded their ministry, which feeds homeless families in Austin each Sunday. Their primary mission in life, however, is to share the gospel with people who desperately need to hear it. People like Joyce.

Shannon and Joyce continued to have regular conversations, sharing fears, hopes and, in Shannon’s case, the message of Christ’s love. Then one night, Shannon’s phone rang. Joyce hadn’t hit rock bottom; she’d crashed headlong into it like a steaming locomotive.

“I had drank almost a whole bottle of whiskey and taken some pain pills,” Joyce recalled, “before blacking out. I didn’t know where I was. I was trying to kill myself. And then I realized this was not the plan he had for me.”

Since that frightful night, Joyce has continued to work, attends regular AA meetings and volunteers with Derrek and Shannon at ARC. She also credits the help of Christ Community Church, where she now attends and volunteers before and after work.

“From that first meeting with my Family Care family to meeting Shannon and Derrick, and the people at Christ Community, everyone has been key to getting me where I am today,” she said. “And I don’t take that for granted.”

Over the years, Joyce stayed in close contact with Family Care. She enlisted services like the Texas Baptist Children’s Home Commissary for food and furniture, as well as the on-campus clothing closet and other aftercare services.

“All of the organizations that worked together to help Joyce are celebrating a victory,” Cristy said. “Because it does take all of us working together to bring about change. And that’s a wonderful partnership.”

That’s one of the reasons many of her network of supporters, including Cristy and Nichole, were on-hand, beaming and cheering as Joyce received her seven-month chip from AA, marking seven months of sobriety.

And, while Joyce is thankful to be free from addiction, she is most thankful for her new relationships – with God and with her boys.

“Cody and Shawn are so proud of me,” she said. “We have a wonderful relationship now. Just eight months ago, Cody was texting me telling me he wanted me dead. Now, he’s rooting for me and wants to be a family again.”

Just as Jesus knew Lazarus was not a lost cause, Joyce knows there is no such word as hopeless when God is in the picture.

“I wish I could tell every person dealing with what I went through one thing: that it doesn’t have to be the way it is. Have faith in God and anything is possible. Serve him and you will be healed.”