Wanting It and Getting it 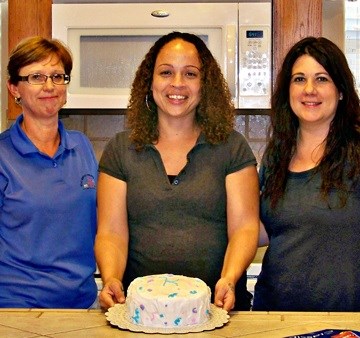 Kalia is every TBCH Family Care case worker’s dream come true. As a single mom of two, she’s faithfully worked her way through the entire program, beginning in a Family Care cottage, transitioning into Independent Living, and now she and her family are enjoying a place of their own.

Having moved from California, Kalia was referred to TBCH by her brother who lived in the Austin area. He knew she was in a tough spot and needed help getting her life back together. And he also knew that Family Care could give her family the chance to thrive. Now, less than two years later, Kalia has successfully completed the program, living in her own apartment, and working part-time, while going to pharmacy school.

The relationships that Kalia was able to build with the other moms and case managers in the program were instrumental to her growth.

"The ladies encourage me and walk through life with me. They keep me on track," she said. In particular, Kalia developed a special bond with her Family Life Coordinator, Suzanne Wood.

After hearing that Kalia had never really celebrated any of her birthdays, Suzanne threw her a birthday party that she will never forget, complete with gifts and her very own birthday cake. This gesture, as simple as it may be, resonated with Kalia and spoke great value into her life.

An excellent student, Kalia has thrived in school – but it’s not been easy. Suzanne often tells the story of seeing Kalia studying at the cottage with her children by her side, poring over note cards that were spread out all over the kitchen table. Studying involved the entire family and her kids have learned first-hand from her example. Her 13-year-old daughter is following in her footsteps and is currently on the honor roll at school.

Marie testifies to seeing the same study habits played out during Kalia’s time in Independent Living. When she would visit, she’d see school materials scattered across the kitchen table: evidence of the hard work and studious efforts of a mom and her two kids. "They’re still watching mom," Marie says. "She’s leading by example and it’s so exciting to see."

Moving from Family Care into Independent Living, a preparatory step prior to moving into her own apartment, Kalia was transparent about her fears of being on her own again. In the cottage, she had developed great relationships and a deep sense of community with the other moms. But in order to continue making progress, she needed to take this next big step.

"It was a bit scary to be back on my own, but I settled in pretty quickly," she shared. Thanks to the continual support of her case worker and Family Life Coordinator, Kalia has adjusted well to the change and her family is thriving in their new environment.

Kalia’s story is testimony to the fact that TBCH’s Family Care and Independent Living programs are making a significant difference in the lives of single moms and families in central Texas. But, in reality, it’s not just about the programs. It’s about the hard work that these moms put into it.