The Music In Him 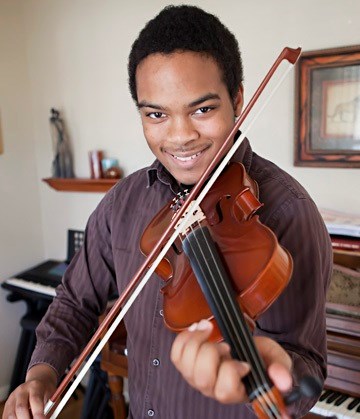 A joyful, content young man is what people see when they first meet Jerone. But in just a few minutes with him, anyone who meets Jerone finds out that this incredible musician’s true passion exudes from every part

“My music is so much more than playing,” he explained. “It is an expression, a way to get emotions out and to create.”

Jerone, who resides in the Independent Living Program at Texas Baptist Children’s Home, has been playing piano since he was 7 years old and today has 13 years of lessons and performance experience behind him.

After what was meant to be a short visit to see his mother who was living in the Family Care program at TBCH in 2009, Jerone changed his life and moved to Texas to pursue a career in music. He began classes at the Art Institute of Austin in 2010 and hasn’t looked back.

Though he transitions to a new music program with the upcoming school year, today Jerone has more to say about his love for music and what it means to him than he ever has before.

It wasn’t always this way. In high school Jerone played music to entertain. He was even awarded “Most Talented/Most Artistic” in his high school graduating class. Though he loved making a crowd happy and being known for his musical skills, Jerone didn’t love music for all that it was back then.

“I didn’t get any fulfillment when playing for popularity, but now that God has shown me how to worship him with it, music has changed for me,” he said. “I get really excited and inspired by learning and playing it now.”

These days, Jerone can be seen and heard playing on the pianos in the cottages at TBCH and at special events on campus. Everyone who hears him, including staff and children, are thankful for this talented young man.

And everyone is anxious to watch his career unfold. Jerone is currently composing original pieces on the piano and is also working to pick up other instruments. Recently he’s taken a liking to the fiddle.

“I love how the fiddle has helped me to connect with new people,” he shared. “I’ve met a lot of people playing my fiddle or even just holding the case in public. It’s amazing what people will stop you to talk about.”

At True Hope Church in Austin, Jerone plays the piano at two services a week. He also keeps his skills perfected by playing for weddings and in school.

He’s also a popular figure on the TBCH campus and has a close relationship with many of the younger children, often sharing his music in the cottages.

“His music calms and refreshes the spirit of our cottage,” said House Mom Joyce Fiaccone. “His skills at the piano are fabulous, but his musical selections are always pure joy to our ears.

“We are always so blessed by his visits. Not only is his piano playing soothing and uplifting, but he is so patient to answer the questions of our little girls as they are magically drawn to the piano when he plays. He is so very talented and I hope that his gift will continue to bless and encourage others as it has us.”

“In the time that I have known Jerone he has consistently maintained one goal for his life—to serve and worship God through music,” said Independent Living Case Manager Cari Downie, who has known Jerone almost from the moment he arrived at TBCH.

“His whole life plan centers around this goal. I love to walk in the front door of the Gospel Suites [the on-campus Independent Living set of apartments where Jerone lives] and hear him playing his fiddle! I am so proud of how quickly he is learning to play this new instrument.”

Though Jerone isn’t certain what the future holds for him, he is sure it will involve a career in music. Currently his most favorable options are to become a music teacher or a music therapist. He dreams of studying at The Julliard School and hopes to work toward that goal.

No matter where he plays, this young musician is a gift to everyone who hears him. The best part is that he loves his music, and for all the right reasons.

“I love it because it is a gift from God,” he said, “and He has allowed me to see that.”