A Mission With Meaning 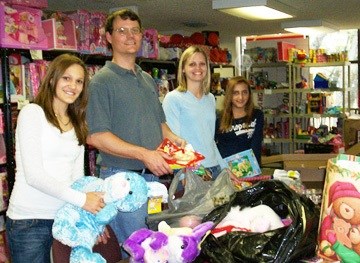 When 13-year-old Makailyn told her dad and stepmother that she wanted to take a family mission trip to Texas, they were more than a little surprised. After all, they lived in Florida and had no direct connection to the Lone Star State.

But Makailyn, who had just been baptized in January at the First Baptist Church in Jacksonville, FL, was given a newfound heart to serve along with her salvation.

Why Texas? Well, Makailyn said she was inspired by God to serve and she chose to come to Texas and the Austin area because of an assignment she completed in school.

“I did a project on Texas and thought, ‘Hey, let’s go to Texas!’” said Makailyn.

Makailyn invited her friend Michaela to come as well and when it was decided that the group of four (and their chihuahua, Snickers) would travel to Texas during the girls' Spring Break, plans were made on where they would serve and minister to kids their own age. Research online led them to Texas Baptist Children’s Home and they quickly made contact with Brenda Gilbert, TBCH Volunteer Coordinator.

They made the long drive from Jacksonville, Florida, in a single day and were only in the Austin area for two days, but those days were filled with ways in which the group could serve others and glorify God.

The days were long, and the girls were up before sunrise, ready to serve, each day of their Spring Break. They started Tuesday morning bagging rice at Capital Area Food Bank and then visited TBCH.

They were taken on a tour of the campus and told the history of TBCH and how the ministry works. They toured Cottage 1, where they met the house parents and visited one of the Family Care cottages. At each stop, they were encouraged by what they heard and saw.

“How incredible to take a tour of the homes and meet people who had given up their own life’s ambitions to live with and raise families that were not their own, and to serve 24 hours a day,” said Sandy. “It was the personal stories [Brenda] shared that really grabbed our attention. This wasn’t just a campus tour; this was a story of God working in people’s lives.”

After the tour, the group went to work organizing the toy room until the kids got back from school. Then came the highlight of their day, where they played games and spent time with the kids in the Activity Center.

While they were there, they also met David Keefe, Minister of Youth and Recreation at TBCH.

“Like iron sharpening iron, we shared testimonies and encouraged each other,” said Sandy. “What a blessing it is for the kids to have someone who cares so much for them, and who spends time just hanging out and playing with them, much like a dad does.”

They played basketball, kickball, air hockey and on the playground with the kids, whom they got to know well and build friendships within just a few short hours.

The next day, Makailyn shared the gospel with the homeless at Mission Possible’s prayer café in Austin and then served lunch at the Angel House Soup Kitchen. But the Neumann's agree that the time spent at TBCH was not only the most fun for the teens, it made the deepest impression.

Most importantly for Makailyn, TBCH helped encourage and disciple a new believer and she went back to Florida with stories to tell of the work God is doing in Texas.

“Our family will not forget our visit and we sincerely hope that we can someday have an impact on your organization,” said Sandy. “Your staff and your children continue to be in our prayers.”