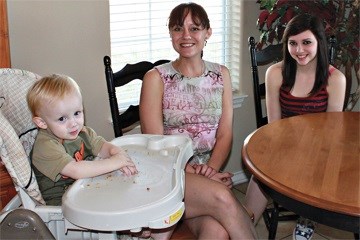 When Amanda came to Family Care last year with her two children, 19-month-old Louis and 15-year-old Jordan, she needed to decide how she was going to provide for her family. The career path she chose might be considered unusual for a mom.

Guided by a unique skill set and an interest in cars, she decided to work toward becoming a certified automotive technician. Amanda will be one of the few women in the industry.

Within a month after she arrived at Family Care, Amanda was enrolled in automotive mechanic school and it didn’t take long before she was recognized as the top student in her class.

Amanda has always had an interest in cars and recalls how her mom would buy her Barbie dolls when she would much rather play with Tonka trucks. Her grandfather owned his own auto mechanic shop, and she would often spend her time there as a child.

She started working on cars at the age of 18, when she owned her first car and realized the advantage of being able to fix it herself. It was then that she began working at a local auto parts store.

After Amanda became pregnant with her daughter Jordan, she had to leave the auto parts industry in search of a higher paying job. She has held a wide variety of positions, including working in a medical billing office, at Apple Computer, and even an exotic pet shop.

Today, she is back working for an auto parts store in order to support herself and her family while she pursues her automotive certification, and while there are still some familiar faces, many things have changed.

When Amanda first started working in the auto parts industry almost 20 years ago, it was a difficult environment for women. She explained how customers would call and ask for parts that didn’t exist or refuse to work with her because they assumed that, as a woman, she couldn’t possibly know anything about cars.

Over time, customers and those who work in the industry have become more accepting of female mechanics, but, in spite of the changes, being the only woman in a class with 22 men is still somewhat difficult.

“You have to be thick skinned and have a good sense of humor,” Amanda said. “It’s a rough environment.”

At first, they treated her differently, but she earned their respect once they realized how much knowledge she has about cars. While most of the guys have accepted the fact that she is the top student in the class, some still resent her. One man who has 20 years of experience is particularly bothered by her success. “I am a constant thorn in his side,” Amanda said with a smile.

She has several job prospects, most of which come from current customers at the store who own repair shops, and she looks forward to finishing school in May.

“Amanda’s story is at the heart of what the Family Care program is all about,” said Amanda’s Case Manager, Marian Marley.

Not only is her hard work and determination paying off for her and her family, she is an inspiration to the other moms in her cottage.