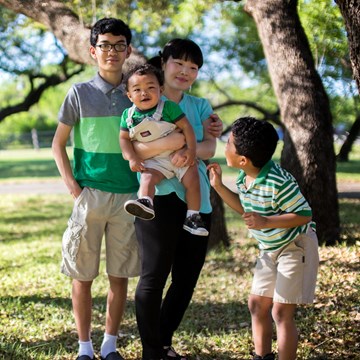 There are 6,248 miles between the place where Tatsue was born and her current home at Texas Baptist Children’s Home. Now in her early thirties, she has a family of her own that she is raising and she is grateful that TBCH is where they’ll say they were raised.

Her life began in Hachinohe, Japan, where she built a strong bond with her loving parents and a small, yet close, group of friends. At the age of 21, Tatsue’s inner circle grew when she met the man she would soon wed. A year later their first son, Marcus, was born and, despite their joy, the marriage was tumultuous and unfortunately did not last.

Though the relationship left its mark on Tatsue’s heart, eventually she found herself in a new relationship and six years after the birth of her first son, together they welcomed a second son, Jaylon.

A few years after Jaylon was born, Tatsue and her boyfriend moved from Japan to Shreveport, Louisiana. It was a change they were both excited about and they were thrilled to find out that they would have a third son entering their world. However, the transition from Japan to the States was difficult and their relationship grew strained. Without her family nearby, Tatsue felt lonely and anxious. She and her boyfriend began to argue every night, which created a volatile environment that Tatsue knew wasn’t healthy for her children.

With her children in mind, Tatsue decided that the safest option was to leave Louisiana and go stay with a family friend who lived in Austin, Texas. When she arrived in Austin, Tatsue was still deeply shaken by the breakup and overwhelmed with the culture shock she was experiencing. She began to feel the loneliness and pressures of single motherhood weighing heavy upon her shoulders.

Desperate to create a loving, healthy home for her children, she tried to get a small apartment … but she didn’t meet the basic lease qualifications due to a lack of credit history and a steady monthly income. “I was so worried about my future. I would wake up in the middle of the night wondering what to do.”

Knowing she needed help, Tatsue reached out to a local pregnancy resource center and they told her about the Family Care program at TBCH. Intrigued by the ministry’s passion for equipping single mothers and helping build a healthy future for families, Tatsue knew that this was the answer she had been searching for during all those sleepless nights. She immediately put in her application.

In November of 2015, Tatsue and her family were accepted into the Family Care program and moved into a cottage on the TBCH campus in Round Rock. It was there that they found the support and healing they needed.

As Tatsue built friendships with the other moms in the program, again finding a close circle of friends, she learned how to better care for herself during her pregnancy and she started adapting to American culture, growing in English proficiency along the way.

“I could ask them questions about being a mom and they just became my friends,” Tatsue says, beaming. “Our kids would play together and my children’s English began improving. I loved seeing them so happy.”

She started a job with Round Rock Independent School District and began to save money and build a credit history, with her sons’ futures in mind. With a steady job, new friends, and the support of TBCH, Tatsue recently enrolled in Austin Community College and continues to work part-time while in school. She spends the rest of her time caring for her three sons, dedicated to giving them the best lives possible.

Since arriving at TBCH, Tatsue has met with a professional counselor on a regular basis who has helped her move toward mental and emotional healing from her difficult past. In addition, she attends TBCH support groups that promote healing for the entire family by addressing the root of trauma, as well as other helpful resources and classes that are offered. As a regular attender of First Baptist Church Round Rock, Tatsue is also involved in many of the church’s activities on a weekly basis.

In September of 2016, Tatsue and her boys moved into the independent living apartments on TBCH’s campus, where they are learning to be a self-sufficient household and live independently, with the care and support of TBCH staff only a phone call away. Tatsue has been approved for an affordable housing program and is currently on the waiting list, looking forward to the day when her family will have their very own home!

Tatsue looks across the field of green grass of her home at TBCH, watching her sons laugh and play together, and reflects, “I am so thankful to everyone at TBCH and everyone who supports this ministry. They’ve helped me, a single mom, through the hardest time. I can’t imagine my life without this; this is a place to rebuild everything.”